Cannabis laws in the U.S. are a little confusing. You can legally buy it in some states, but you can’t in others. According to the federal government, it’s a Schedule 1 drug, and it’s illegal to grow, sell and consume it anywhere in the country. And when it comes to transporting marijuana across state lines?

It’s no surprise that many consumers just don’t know what’s legal — and what’s not.

The Legality of Marijuana State-by-State

Each state passes its own bills regarding cannabis, and most states are currently pro-cannabis for either medical or recreational purposes.

But what exactly does that mean in terms of transporting marijuana across state lines?

The short answer? It means it’s illegal to do so.

What If It’s Legal in Both States?

The obvious question is, “What if I’m bringing marijuana from California to Oregon? Isn’t it legal in both states?”

Our recommendation? Don’t plan on taking that cannabis road trip up Route 1 anytime soon. Because even if it’s legal in your state of origin and your destination, it’s still technically illegal to transport marijuana across state lines.

While possession of cannabis is legal in both California and Oregon, the border crossing is considered federal territory.

Realistically, the chances that you’ll find the Drug Enforcement Administration or FBI patrolling a border crossing of two pro-cannabis states, waiting for you and your special brownies to cross are slim to none.

The government would be spending time and money trying bust someone on a very specific technicality that may or may not hold up in court.

Still, we don’t recommend trying it.

And if you are trying to transport marijuana from a state where it’s legal to one where it’s illegal? We really don’t recommend trying it. That’s just asking for trouble.

Certain airport security checkpoints are also regulated by the federal government, so you shouldn’t fly cannabis either. While most states where cannabis is legal don’t perform routine baggage checks for the drug, we don’t recommend taking the chance.

The Future of Transporting Marijuana Across State Lines

While transporting marijuana across state lines is currently illegal, there is hope that all that will change in the future — for Oregon, Washington and California at least.

In June 2019, the Oregon House passed a bill making it legal to transport cannabis from Oregon to other states where marijuana is legal.

The biggest drawback? The federal government will need to approve the bill. It’s unclear when (and if) that will happen, but lawmakers are hopeful that the bill will force federal legislatures to re-examine current cannabis laws on a federal level as well.

Our professional opinion? Don’t transport marijuana across state lines. Period. Even though certain states are unlikely to enforce this technicality, you should still play it safe and abide by the law by leaving your bud in the state where you purchased it. 5 Tips For Making Cannabis a Part of Your Healthy Lifestyle

How to Make Edibles 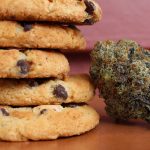